The greatest mystery of life is who we truly are.  Costumes and masks have allowed people for centuries to be someone or something else and conceal their outward identity. The word costume is defined as the unique style of dress of a group or person that portrays their gender, class, profession, ethnicity, nationality and activity. The word costume actually originates from the Italian word meaning custom or fashion.

People used to use the term costume to describe common place clothing they wore for particular actives such as a horseback riding costume or a dance costume. However, now a days this general usage has been slowly exchanged by the terms “dress” or “clothes” and using the word “costume” has become more reflective of out-of-date clothing and used to show a change in identity like in a theater setting, during Halloween, and the like.

I find it so interesting to note that before we had these huge warehouses that manufactured our generic clothing it all used to be made by hand. In the beginning of the 20th century women were running businesses that handmade intricate female corsetry and detailed hats. The women that created these beautiful handcrafted pieces were actually called “costumiers.” 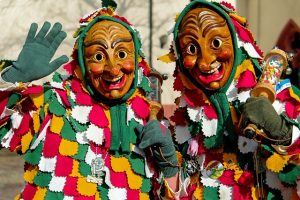 When people think of the word costume they usually don’t think of National costume or something that expresses and highlights a certain cultures special features. I really do think the word costume deserves respect and realization that is does represent a source of a nations pride and or beliefs. Some good examples would be the beautiful flamenco dress worn by Spanish women or the Scottish kilt.

Then we have “costume” referring to a certain style of dress that is worn to represent a character or sort of character during a theatrical performance in film, TV, or stage play. If a certain element of a character needs to be exaggerated then some specialized theatrical costumes can be used like Harlequin.

Of course all throughout history we know that people wear certain costumes for religious festivals, parades, sporting events and parties and many other special events.